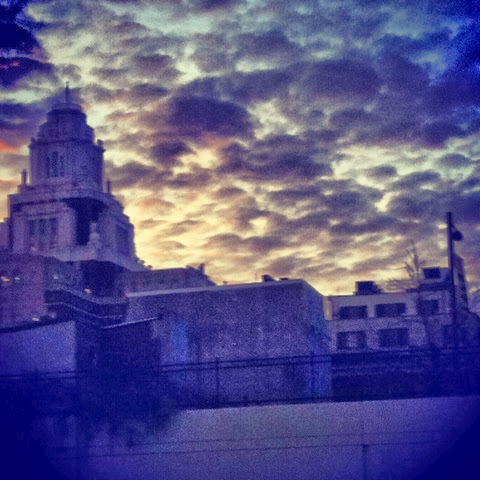 Tonight was stunning. Absolutely stunning. There are days that seem so ordinary, that I tend to forget to live with great expectation, and then God just shows up and does something marvelous beyond what I could have imagined. Tonight was precisely that type of experience.  Five of us crammed in, all cozy in the van, to drive to Sunday Breakfast Mission, Philadelphia.  We know this type of ministry. We know rescue missions and we love them, because we are regulars at the chapel services in Wilmington- both the men's side and family side there.  And the services are always exquisite; the Holy Spirit pours out in doses almost too large for us to handle.

However, there seems to be this occurrence for most people—when we get into routine in our little worlds, we get so used to the atmosphere, so used to the scene, that we forget to be amazed when the miracles teem down. That tendency was shaken up for me tonight, though, as we relocated to another city, visiting our neighbors in downtown Philly, where God asked me once again to not hold onto the mindset of ordinary, but to rather exist in the midst of the extraordinary. He reminded me that He is alive and mightily at work and showed me this through the voices of one hundred men.  He drew my heart into His astounding glory amid seemingly wrecked and worn-out and weary souls. He prompted my mind to think upon the wonder of who He is as great King of heaven and King of earth. He revealed marvels of the mystery of the incarnation and the wonder of His presence here with us, every moment.  And He gave me a glimpse of what the heavenly choirs are going to sound like…Let me just tell you, it will be something overwhelming and breathtaking. 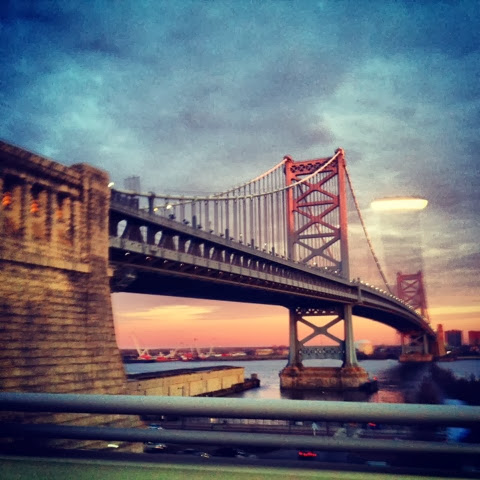 We walked into a room of men trying to warm themselves inside after a long day in the freezing November city air.  The aroma was strong…one hundred sweaty and soiled men finding their seats. The deep eyes—some downcast, some hopeful.  Hair matted by hats or grayed by the years.  A sea of mostly black faces with white sprinkled about. Wrinkles and aged freckles, sand-papered hands, and layered limbs…each representing an inimitable story, some just waiting for a chance to be told.

Chaplain Sam got the crowed “Amen-ing” and “Hallelujah-ing” off the bat, and we began to worship.  What followed was something of the Lord, not of human leading.  As we started the songs, there was an atmosphere of sudden grace, and a sense of angelic presence.  The notes resounding through an air of wonder, the worship reverberating from wall to wall.  There is power in the name of Jesus! We sang this Jesus Culture song and it was like I had heard it for the very first time. The booming men’s voices, all ages and timbres, soared through the room.  I can attest, this power was very real!  By the time we got to “King of Heaven” (Hillsong United), this mish-mash choir of bedraggled and blessed gentlemen were up on their feet again, boldly proclaiming praise. Emmanuel!  God with us!  Emmanuel!  Hallelujah! I could hardly hold back the tears.  The sound was more melodious than an Oscar-winning soundtrack.

This was the soundtrack of the moment…the story of God-with-us in that moment.  We saved these magnificent few minutes. An ocean of diverse, yet unified voices rose in praise like I’ve never quite heard before.  It really was a glimpse of unadulterated delight—those faces.  A mighty crash of heaven meets earth in a hallowed moment of brokenness and blessing.  Tones and expressions of reverence toward God so striking.  I didn’t want the song to end.  I didn’t want this foreshadowing and taste of glory to be over, for us to go back to life as usual with its pain and disarray…back to the city night sadness and present uncertainty for so many of these lives.  But the moment went just like it came, unassumingly slipping into the night.

The sermon was filled with vital truth and vigor.  Men found themselves walking forward during the final prayer, making decisions to follow Christ from this night forward.  Their voices rang out through the closing song.  I tried, hard as I might, to savor this heavenly choir and remember this night.  I want to go back to my hometown rescue mission with new inspiration and vision.  Sometimes stepping out of our own place of normalcy and comfort into someone else’s ministry, home, or  environment, sparks a new flame of passion, rekindles a heart of expectation, and reignites the eyes to see miracle’s fire.  My ears were most assuredly renewed in their sense of the holy.  I will remember those voices, that chorus of burly glory that sang tonight with such intensity, fervor, and abandon. I will recall the deep soul singing and I will ask God to keep me awake and aware to these miracle moments in the days and weeks to come. 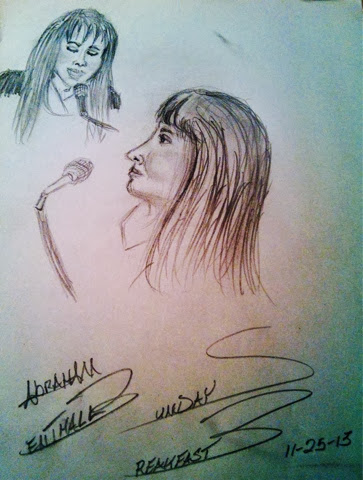 (My new friend Abraham sketched this while I sang...I wish I could have sketched the picture of one hundred faces--tired, shy, beaming, bold, rugged, hungry, expectant, hurt, hopeful...)

Dozens and dozens of camouflaged birds flutter about through the brown, curled leaves, wet with dew. They scour the early Saturday morning dirt, looking for breakfast, each one in the dance and rhythm of the hour. Squirrels chase about, too, up and down the oaks. And a cat races across the meadow, stopping only at the foot of a huge trunk, peering up with fierce eyes amid thick fur toward the playful squirrel. Then she swaggers toward me, those same penetrating eyes gazing into mine. She seems to question my presence, strut her style, then race on down a path lined with low rowed vines, as if she rules the roost, yet somehow giving away her secret fear of human presence. Now the birds up high in trees squawk. Not yet a half hour has gone by and their voices raise, just a little louder than the sizzling of farmhouse bacon on the stove...it is a rumble and bubble, surely not a song. And large geese join them as they fly not far off in their November "V".

It becomes chilly, but I don't want to leave. Not yet. The squirrels still play, so why not I? It is a Saturday morning after all- a time for joy, for cartoons, for effervescent fun. This is the entertainment of the morn, the wistful play of birds and squirrels and cats and critters. The foxtrot of the forest. I sit still, so still. But my heart dances with them.  I gaze off to that bush, mid-horizon.  I heard last week that this particular bush invades the eastern region; left to it's own devices it would surely desire to take over the woods. But it is beautiful. Pink lemonade and lime green float the leaves in the cool morning wind. If beauty invades, is that such a bad thing? Or is it invasion that slowly comes like sin, disguising itself in charm? I've thought about this for a few days.  In life it can be difficult to have a discerning heart, to see clearly and know upon which type of beauty it is that we gaze. Sometimes it seems too late when sadly we find it is the latter...yet sometimes we do away with it too soon, when it is blissfully and innocently the first. 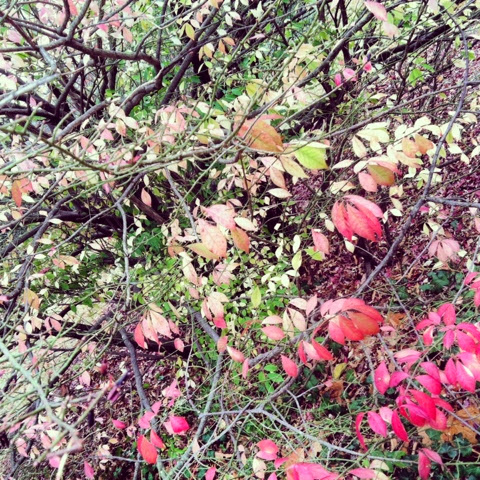 It is good to be alone. Cars swirl past, but they drive outside the high stone wall, the gate of my "secret garden." I always wanted a garden, but I am anything but a gardener.  I keep one plant- one. And I hope it survives; which it does, because it is an indomitable, stubborn thing, and for some reason has an uncanny liking for when I let it endure days of thirst.  After the children's movie "the secret garden" years ago, I dreamed of having a place like that of my own. Not quite six years past I found this place and it has soothed me with the beat and colors and lines of life during my visits. God speaks here. And even when He does not speak, His silent presence is so holy and gorgeous. It all seems like a whisper from ages past. On the hill rests an old house, the aged excellence now so forlorn, atop an estate that once held grand balls where elegant folk came from miles around for dinners and dances. This is a gardener's delight. A writer's dream world. A photographer's landscape. A simple creature's window into the extravagant Creator's heartbeat. Stone statues all about with heads looking ethereal and reverie like. I imagine a small wedding here, a bride laced in white with eyes veiled as she makes her way long down the ivy-charmed path into her husbands vow and kiss and strength. Like righteousness and peace sealed eternally with an enchanted kiss.

If this blissful, captivating place is a broken garden, one wrought with winter and fallen leaves, rose bushes left as thorns, and ornate fountains dried up,  then how much more glorious is the garden of our God? I try to begin to imagine the ancient garden of Eden, one day restored in it's heavenly beauty, guarded with flaming angels and encompassing the presence of holy God.

“Listen to me, you who pursue righteousness
and who seek the Lord:
Look to the rock from which you were cut
and to the quarry from which you were hewn;
look to Abraham, your father,
and to Sarah, who gave you birth.
When I called him he was only one man,
and I blessed him and made him many.
The Lord will surely comfort Zion
and will look with compassion on all her ruins;
he will make her deserts like Eden,
her wastelands like the garden of the Lord.
Joy and gladness will be found in her,
thanksgiving and the sound of singing."   (Isaiah 51:1-3)

And so I rejoice quietly as I walk through the garden, through the trees, the crunching leaves and runaway creatures. I ponder on the glory of God. I think of the wastelands of this world and how even in the midst of looming fear, tragedy, and dreary, aching, bleak days, there is a garden of which we can dream, a gladness of which we know is promised. Let us pursue righteousness. Seek the Lord in His strength. Find comfort in His compassion. Let your ruins and my ruins become restored hope. Let these wastelands become waves of new life. We'll sing a song. Tis the season for a thankful, faith-filled heart. 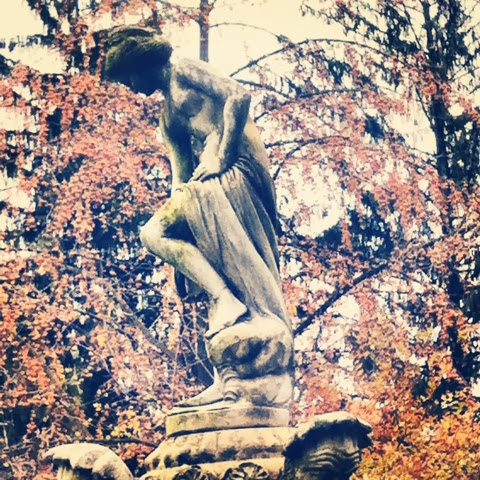