Track Listing:
1. Agnus Dei (O Lamb of God)
2. Nothing But the Blood
3. It Is Well With My Soul (feat. Krista Dengler)
4. Great Is Thy Faithfulness
5. How Great Thou Art
6. Holy, Holy, Holy
7. For the Beauty of the Earth / Amazing Grace
8. Love Divine, All Loves Excelling
9. He Leadeth Me
10. Blessed Assurance
11. Come Thou Fount of Every Blessing
12. Be Still My Soul
13. Turn Your Eyes Upon Jesus
14. Of the Father's Love Begotten (Evermore)

Great Is Thy Faithfulness

Between Thanksgiving and Christmas, between the hustle and bustle of the holidays, between the baking and the shopping and the school pageants and the decorating and the tree-finding and the hallmark movies and the glow of lights...this is such a perfect time to pause. Pause and pray and consider who God is and what God has done. We give thanks, and we remember how Emmanuel first came and entered into our world as a baby boy, bringing light into the darkness, bringing hope into our mess. And it was not just for one moment or one generation, but for all of humanity, for all of eternity. He is Savior, He is Giver of Life and Giver of all good gifts, and most of all, He is faithful. 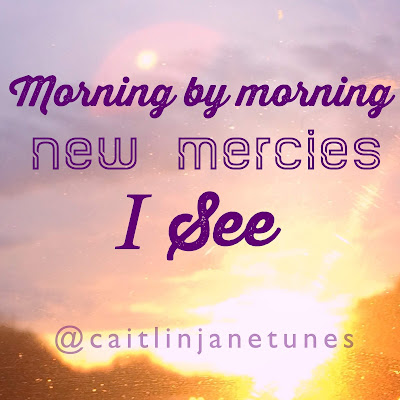 You may be facing an insurmountable trial in your life right now that seems to be draining all of your hope and joy. Or you may be in a season of sailing smoothly on the high seas, enjoying the journey. Or you may be just about to embark on your greatest adventure yet. Or you may feel lonely, weary, and just dull. Or maybe the pressure is mounting at work and at home like never before, and you don't know how much longer you will be able to stand. Or maybe you are experiencing blessings abundant, and yet in the midst of all the good, you don't seem to have one spare second to yourself to just be still.

Whatever season you and I find ourselves in this Christmas, we can all rest in one common promise:


"The LORD's loving kindnesses indeed never cease,
for His compassions never fail.
They are new every morning;
Great is Your faithfulness."
(Lamentations 3:22-23)

The writer of one of the most beloved hymns of all time, "Great is Thy Faithfulness," knew deeply and personally the faithfulness of our loving God. Some may say his life was unremarkable. Nothing incredible happened that would put his name in lights in the pages of history. There is no extraordinary story behind this hymn. But it was in the ordinariness of life that Thomas Obediah Chisholm learned of God's great faithfulness. His hymn was simply inspired by the foundational truth that God is always working in our lives in His sovereignty and goodness. He is faithful in the highs and in the lows, in the interesting and in the dull, in the colorful and in the bleak, in the painful and in the joyful, in the expected and in the surprises.

Just as on a wedding day, when two lovers commit to fidelity until death do them part, our God has committed His steadfast and firm faithfulness and love, unmovable and unshakable, until He completes that which He began in our lives and brings us home to eternity with Him one day. The wedding analogy doesn't even come close, however, to doing our God's love or faithfulness justice, because as humans, even with our best intentions and even in a good marriage, we let one another down and we fall short of perfect love. However, God's love and promise and commitment will never let us down or let us go. He is faithful until the end. He is the same yesterday, today, and forever. He is the Alpha and the Omega, our Good Father, and the friend who never fails us.

Thomas Obediah Chisholm was born in a log cabin in Franklin, Kentucky in 1866. Although he lacked any formal education, growing up on a farm, he became a teacher at the age of 16 and by age 21 was the associate editor of the Franklin Advocate, his local newspaper. At 27 years old, his life was changed as he began following Christ. Henry Clay Morrison, the founder of Asbury College and Seminary in Wilmore, Kentucky, had a huge influence on Chisholm's life and conversion. (I find this fascinating, because my Grannie, Sylvia Grant Elliott, attended Asbury and graduated from the college in 1938, just 45 years after Morrison led Chisholm to faith in Jesus Christ). Because of Morrison's encouragement, Chisholm decided to move to Louisville and there he became the business manager and editor of the Pentecostal Herald. 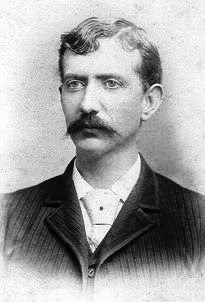 In 1903, at age 36, Chisholm was ordained as a Methodist preacher. However, due to poor health, he only served for one short year at a church in Scottsville, Kentucky. Sadly, he had to retire from the ministry. He moved his family to Winona Lake, Indiana, to help in his recovery from illness. After that, they moved to Vineland, New Jersey, where he sold insurance for the next 37 years (1916-1953). He lived out his last years in a Methodist retirement community in Ocean Grove, New Jersey until he went home to be with his Lord Jesus in 1960. Although Chisholm was unable to stay in ministry, as his heart had desired, he wrote over 1200 poems and hymns- 800 of them were published and many were set to music. These poems and hymns were often featured in well-known Christian periodicals in his day, including Moody Monthly, Alliance Weekly, and Sunday School Times. He was purposeful in his writing to interweave Scripture throughout, keeping his texts Biblically based and far from frivolous or sappy topics.

Chisholm sent a number of his poems to his friend, Rev. William M. Runyan (1870-1957), who was a talented musician and composer, as well as one of the editors of Hope Publishing Company in Chicago and co-editor of The Service Hymnal. Runyon remarked later, "This particular poem held such an appeal that I prayed most earnestly that my tune might carry over its message in a worthy way, and the subsequent history of its use indicates that God answered prayer." Runyon wrote the tune in 1923 and published it first in his private song pamphlets. But we all know it's impact has been far and wide. 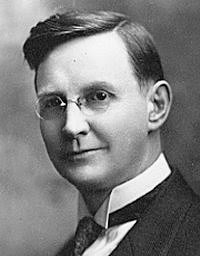 Runyon was first an ordained Methodist minister at age 21, pastoring several churches in Kansas. At the age of 45, he started writing gospel songs, after D.B. Towner from Moody Bible Institute encouraged him to do so. Later in Arkansas, he pastored a church and was editor of the Christian Workers' Magazine. Throughout his studies and career, he attended Northwestern University, had affiliations with John Brown University, worked for Moody Bible Institute, received the honorary Doctor of Letters from Wheaton College, and was a professor at Baker University. Quite an accomplished man in ministry and work, we can all be thankful for his gift in writing the tune to "Great is Thy Faithfulness" and the legacy of faith handed down through that song.

This hymn has always been a favorite of mine, but there is a reasons I was especially inspired to include it on the Hallelujah album. As the world said its fair-wells this past year to the Rev. Billy Graham, the great evangelist, many remember this particular hymn from his crusades around the globe. George Beverly Shea, the Canadian-born singer, introduced "Great Is Thy Faithfulness" in 1954 during the Billy Graham crusades in Great Britain. From then on, it has been a favorite hymn to thousands upon thousands... 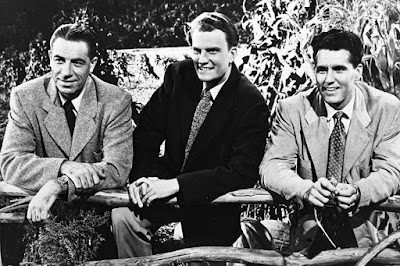 Billy Graham with George Beverly Shea on his left and Cliff Barrows on his right
(the two musicians who worked alongside Rev. Graham during the Evangelistic Crusades)

One of the beautiful themes found in this hymn is God's immutable nature, which is found in the first verse. He is never-changing, always the same, always good and compassionate.


"Every good and perfect gift is from above,
coming down from the Father of the heavenly lights,
Who does not change like shifting shadows."
(James 1:17)

Verse two celebrates the predictability and continual cycle of the seasons, year after year. Creation declares not only the glory of God, but the faithfulness of God.


"Praise the LORD, my soul.
LORD my God, You are very great;
You are clothed with splendor and majesty.
He set the earth on its foundations;
It can never be moved.
He made the moon to mark the seasons,
and the sun knowns when to go down."
(Psalm 104:1, 5, 19)

The third verse points to God's personal presence in our lives- His abiding peace through all circumstances and His perfect forgiveness for our sins. No matter what happened in our past or what our future may hold, He is with us at every moment and eager to bless us and provide us with hope.

"If we confess our sins, He is faithful and just to forgive us our sins
and to cleanse us from all unrighteousness."
(1 John 1:9)

"Let us hold unswervingly to the hope we profess
for He who promised is faithful."
(Hebrews 10:23) 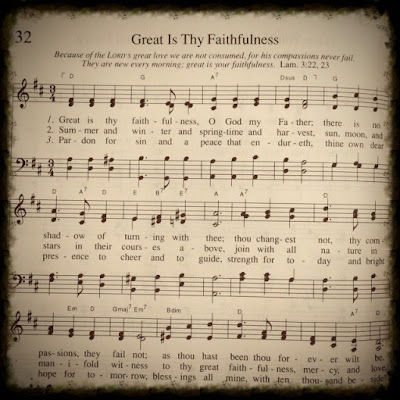 The Biblically-rooted theology of this hymn, and the way that it can connect to almost every believer  in a very real, intimate way, makes it one of the most simply profound pieces of worship handed down in history.

Chisholm reflected late in life, "My income has not been large at any time due to impaired health in the earlier years which has followed me on until now. Although I must not fail to record here the unfailing faithfulness of a covenant-keeping God and that He has given me many wonderful displays of His providing care, for which I am filled with astonishing gratefulness."

May we, too, as we look back on our lives and look ahead to the future, bear testimony and witness to God's great faithfulness!


Great is Thy faithfulness, O God my Father;
There is no shadow of turning with Thee,
Thou changest not, Thy compassions they fail not,
As Thou hast been,Thou forever wilt be.

Summer and winter and springtime and harvest,
Sun, moon, and stars in their courses above;
Join with all nature in manifold witness,
To Thy great faithfulness, mercy, and love.

Pardon for sin and a peace that endureth,
Thine own great presence to cheer and to guide;
Strength for today, and bright hope for tomorrow
Blessings all mine, with ten thousand beside.

Hawn, C. Michael. "History of Hymns: 'Great Is Thy Faithfulness.'"https://www.umcdiscipleship.org/resources/history-of-hymns-great-is-thy-faithfulness

"'Great Is Thy Faithfulness'- The Story Behind the Hymn." http://gaither.com/news/“great-thy-faithfulness”-story-behind-hymn